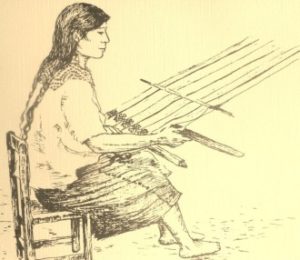 We celebrate several decades of collaboration and friendship with three groups of weavers, totaling about 150 women.

Tsobol Antzetik (Women United) is a group of Tsotsil-speaking Maya women from several hamlets in the township of San Pedro, Chenalhó, living on their milpas, small plots of land where they raise corn, beans, and squash. Working at home on back-strap looms weavers earn cash while fulfilling their household obligations and honoring their people’s traditional ways of working. Despite the Mexican government disregard for their welfare, the women of Tsobol Antzetik stay united around their work as weavers and as members of the movement for social justice in their communities which they call “the resistance movement.”

Mujeres por la Dignidad (Women for Dignity) is based in the autonomous township of Oventic, one of the regional centers of the Zapatista movement. Some of the ninety weavers in this cooperative are teachers in autonomous Zapatista schools, teaching without pay as part of their service to the movement. They weave in order to support themselves and their families. For background on the Zapatista movement go to: enlacezapatista.ezln.org.mx

The Doll Makers are a group of single women living in San Cristóbal de las Casas who make the unique nursing dolls. Led by long-time friend, Petra López Díaz, the women make dolls dressed in clothing that is the exact replica of authentic hand-woven clothing of indigenous women from Chiapas townships. The dolls come with a baby that will rest in the mother’s arms or will snap onto her breast.

The Zapatistas and Las Abejas (The Bees)
The weavers in our partnership are members of the Zapatistas or Las Abejas, two organizations dedicated to social and economic justice. On January 1, 1994 thousands of armed indigenous men and women took over major population centers and hundreds of large ranches in Chiapas.  Calling themselves the Zapatista Army of National Liberation after Emiliano Zapata, the revolutionary leader of Mexico, the Zapatistas rose up against the neoliberal economic policies enshrined in NAFTA, the International Monetary Fund’s structural adjustment programs, and federal policies that undermined the survival of small farmers in Chiapas and throughout Mexico.  Support bases for the Zapatistas soon formed in Chenalhó where Las Abejas (The Bees), a Catholic social justice organization, already had a strong presence.

When these groups began to create autonomous economic and political projects, the government responded with force. The Mexican army was sent to Chenalhó to crush the resistance movement, but they could not openly attack the Zapatistas because the Mexican Civil Society and the international community had risen up in support of their goals and demanded a peaceful resolution to the conflict. Therefore, the army trained and armed paramilitaries who began to violently evict Zapatistas and Abejas from their homes and commit other acts of violence against them. The worst example of this occurred in Acteal, a small hamlet in Chenalhó, where members of the Abejas communities had sought refuge from paramilitary aggression. On December 22, 1997, while they were fasting and praying in the chapel, a paramilitary group massacred 45 unarmed Abejas, the majority of them women and children. Tensions continue as perpetrators of the massacre remain at large.